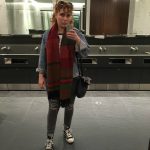 The world is okay with double denim again these days, right? And blue and black? And black at weddings, for that matter? I’ve never been one to follow the rules anyway, so it doesn’t really make a lick of difference to me. But if double denim is wrong I don’t care because it feels so right. I’m probably getting around in it about 75 per cent of the time these days (more on the other 25 per cent below).     The very wonderful Dr Lynika had a suggestion

I think I’ve mentioned this on here before but, for sure, one of my favourite ways to come up with outfit combinations is doing the laundry.     Weird, right? But all that stuff jumbled in a pile on the bed to be put away (I’ll get to it, I’ll get to it) means stuff you’d never think of pairing gets mooshed up next to each other. Even on the clothes line. Pulling things out of the basket to peg on the line, in no particular order other than

On the fringe: a documentary 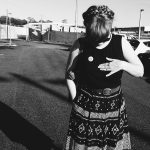 Oh hey, did you guys know I have a fringe now? Cuz I do. Have a fringe. Now.     I’m not sure I’ve posted about it here. It’s well documented over on Instagram. Maybe not “well” documented. How documented is “well” documented? It’s adequately documented? I dunno. My point is, you’d know about it, if you followed me on Instagram.     Which reminds me. I like to dig into this here treasure chest of a personal style blog to pull out some pearlers for #flashbackfriday (the 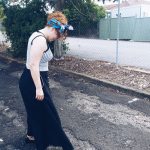 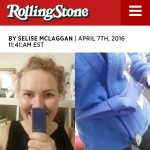 This is something I posted on Instagram this morning but it is too big a moment not to include here on my blog.   Well. What a week! Published in Rolling Stone and awarded my blue belt in BJJ.   I have to say, the common thread between the two (aside from the obvious word “rolling”) is definitely perseverance.   From the day I emailed the editor to the day my work was published in Rolling Stone was a little over a year. I could have easily given up very 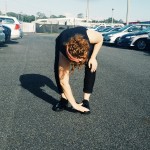 I’ve gotta admit. I feel bad for you guys.     If you’ve got 99 problems, there’s a good chance one of them is not being able to see how shiny my shoes are.     Because they are REAL shiny. Like, real.     Not sure where the JAY-Z inspo came from there. I’m glad it popped by though because it reminded me of a recent late night bar conversation with pals where the misheard question of, ‘what’s your favourite rap lyric?’ became, ‘what’s your favourite raptor?’ 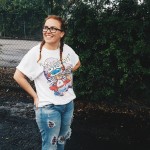 I got this Ren & Stimpy T-shirt for my 13th birthday. Which makes it vintage. Can you believe it? I can’t. I mean I can, but I’m reluctant.     At the bottom of the image is the little copyright symbol and the year 1994. I got the shirt in April 1995. And I loved it. Wore it all the time. In fact, my wearing it got Ren & Stimpy shirts banned from my high school. Go figure. They banned Harley Davidson Fat Boy shirts after I wore 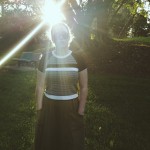 This right here is pretty much where I’m at these days.     Not the park. I mean style-wise. Geometrically, not geographically. Ooh.     This whole clean, block colours, geometric patterns, knits and natural fabrics. I’ve been here for a while now and don’t show any inkling of budging.     And that’s just fine. I like it here. We have snacks. Sunglasses: David Jones Top: Cue Skirt: Myer Shoes: Myer 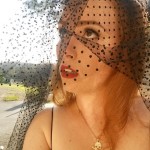 You guys.     Seriously.     I may never, ever take this veil off. Ever.     The Man and I attended a supremely excellent Halloween wedding this year and the theme was ‘haunted mansion.’ So we hit the op-shops where I found this gown for $9. (Originally I was hoping for something a little more gaudy, a la 80s bridesmaid but in the end I was stoked with the direction this took the overall outfit.) Then to Spotlight for material to make said veil and the faux

But that’s over now 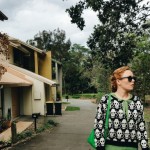 A couple weeks back, Brisbane gifted us with a delightful cold snap a month into spring.     We should have been shedding layers but instead I found myself digging out the winter gear I’d just packed away.     Of course that’s all well and truly over now. I’m writing this wearing shorts and a T shirt.     But for one glorious afternoon/evening I got to wear a woollen skull sweater over one of my favourite green dresses, with my new green bag and new green