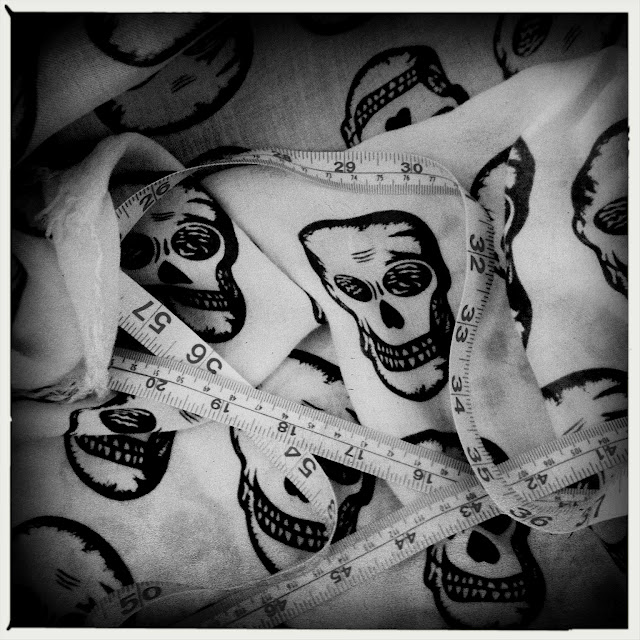 I had planned on taking pictures of the size tags in my clothes. Turns out I’ve cut most of them out. So I took a picture of a tape measure against a rad skull scarf instead. It’s practically the same thing, right? (I know, it’s totally not. Unless I wanted to get crazy deep and talk about our skeletons and maybe how the media is making us waste away and stuff. But I’m not going to.)


OK, here’s how this whole thing came about. The other day I bought a size XS dress.


Actually, wait, that’s not entirely how the idea for this post came about. I’m gonna be honest with you guys. And it might be a little embarassing. For me, not you, don’t worry.


So…a couple of weeks back I bought some underwear on sale. Same as I always get. (When you find some you like, STOCK UP! Seriously I’ve got, like, 14 pairs. At least.) Anyway, I always get these in a large, right? (More on that in a minute). So I buy 2 pairs in large. A few days later I go to put a pair of them on and think, “Hmmm, they seem a little smaller than usual“. And sure enough, they’re a size small.


The swing tag said large but the inside tag said small. Note to self: check both next time!


But what do I do? I’ve already cut the tags off and washed them. Besides they were down to, like, $1.45 or something ridiculous. So I put them on (I tried writing “popped” and “whacked” but turns out you only ever “put” underwear on). And you know what? They fit.


Now, this is probably not revolutionary to you. In fact, you’re probably wondering why I felt the need to broadcast my underwear habits to the world. And believe me! I’d rather not! I’m a private person (aside from posting outfits for the entire world to see, obviously) and generally do not go about dishing on my smalls. But it was one of those “Whoa” moments for me. And I’ll tell you why.


Like I said before, I always buy my underwear in large. And same goes for my clothing, I always err on the side of bigger. Mostly this is because I prefer things that “don’t touch me” (which is probably partially because I live in Queensland – “Hi, heat and humidity. Why you guys gotta be around all the time?”) but if we’re being honest, it’s also because I think I’m bigger than I am. And it took a pair of size small undies to show me that.


Now back to that size XS dress I bought recently. XS? Yup. I don’t know why I even took it into the change room (Actually I do – it was on sale (of course) and the only size there). But it fit. And it looked good. And I bought it.


The thing is, that same month I also bought a pair of jean shorts. Size 16 (also on crazy sale, of course). Which also fit (albeit a touch big but not falling off or anything).


You know how I said I always err on the side of bigger? Well, you know what happens as a result? You wind up believing you’re bigger than you actually are.


So I’ve started doing a little experiment lately. I bring a smaller size into the fitting room. Where I would usually grab a size 12 T-shirt, I grab a size 10. And you know what? Yup, they fit. It’s a revelation. It’s like all along I had this body and I didn’t know.


And what I’ve taken from this whole thing, and I’d love you guys to as well, is this:


Those tags? Don’t matter. Seriously. The only thing they do is assign you a number that you think defines you.