A Tale of Two Boots 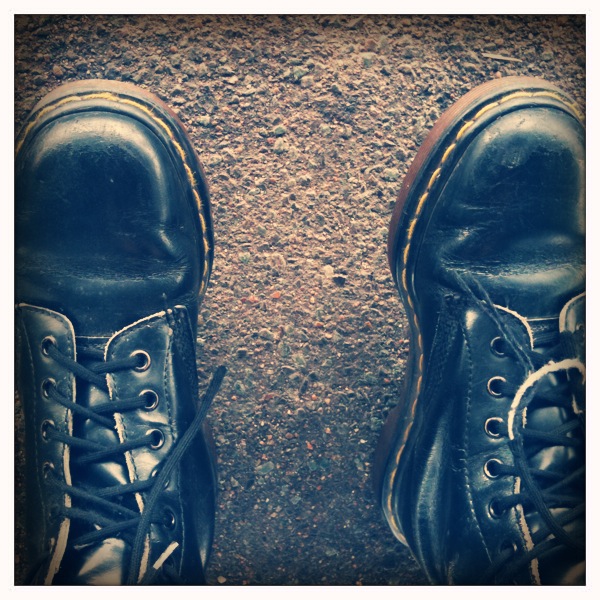 Friends, gather round. For today I have a tale to tell.

Almost 11 years ago now I, a bright eyed babe of a mere 18, came upon a vintage store whilst out with my Mum.

Intrigued we entered. And lo, like a shining light from our lord John Hughes himself were the exquisite Doc Martens you see before you.

I was but a simple girl. An Australian abroad in a far off land where people parted with such awe inspiring shoes after a mere trip or two around the block.

I knew that no matter the price, I had to have them. They would fill a hole that had existed within my very soul from the moment I became aware that such shoes existed as a wee bairn in high school.

With trembling hands I softly stroked the firm leather and with a breath in I sought the price tag.

All the words from all the mouths of each of the poets will never describe the sheer joy I felt at that moment.

I clutched them to my body and refused to put them down ever again.

Of course eventually I did put them down. I put them on my feet and together we conquered the world. There was no outfit not bettered by their presence. No mosh pit too muddy.  No bar room floor too sticky.

I loved my boots and they loved me.

But a strange thing has happened. Where once my dear Docs would take me anywhere without so much as a whisper, there is now a groan. Even a squeak if listened to in the right acoustic.

How could this be? After 11 blissful years together what has gone wrong?

Perhaps they are upset that I don’t wear them as often. But, no, I don’t think that’s it. I wear them more than any of my other shoes.

Maybe they miss the stomping, the stumbling, the hours waiting and watching.

Or could it be they’re crushed, as I am, by the new, lithe, nubile generation of Doc Marten wearers.

And what now? Will the story end here? Will I cast aside those that have taken me through miles and milestones in favor of those that are new? Those that having no stories to tell, are silent?

I cradle them gently in my hands. I loosen the laces to make them a little more comfortable. They seem to like the extra breathing space. And I marvel that they have served me so long.

Then, with the conviction of a mother to their child I slip them on my feet, gather the worn laces and again take to the road.

Though they are old and worn; though they squeak and moan; though they’re balding on one ankle – these are my boots. And we’ve got a whole lotta journey left in us yet.